Force Measurement in all its variety
Menu 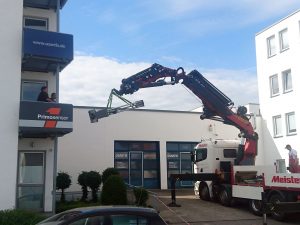 Primosensor has been expanding since its establishment in 2010. It has been growing continuously and manageably, because growth must be planned in order to ensure that higher quantity does not lead to a loss in quality. After founding a production company in Jasionka (district Rzesów, Poland) in December 2016, which made serial production possible, the next step is due now: Production at the headquarters in Dieburg is to be expanded. When some rooms on the ground floor became available, they were modified and refurnished during the past months. On July 18, a team with a crane dismantled the test bench for force transducers and measuring rings, which weighs several tons, and carried the individual parts from the old rooms on the first floor to the new ones on the ground floor. Those components still weigh several hundred kilograms. We owe a great debt of gratitude to the team of company Meister in Dieburg, who performed the task with the same precision which is characteristic for our own products.

Our new limit switch enables you to shut down overloads safely

Minimum effort, maximum effect: This is how our new force transducer for cables works